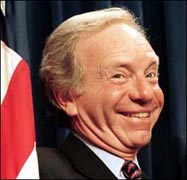 Lieberman swears that he will side more often than not with Democrats, and yet if he keeps this up, Democrats won't want him, and neither will the Republicans.

Today, Lieberman proposed that Congress should consider an additional tax to fund the war on terrorism. According to the Reuters article, Lieberman is quoted as stating:

"When you put together the (Pentagon) budget and the Homeland Security budgets, we need to ask people to help us in a way that they know when they pay more it will go for their security,"

Maybe this could be considered as an "elective tax" for those who want to find a way to funnel more of their money into the war effort.

Three things are clear, however: most Americans didn't receive any real form of tax relief from Bush's cherished tax cuts to begin with - those cuts only rewarded those with the highest incomes.

Secondly, a vast majority of Americans don't support the Bush Administration's handling of the war effort to begin with - and certainly aren't going to jump at the chance to have more money siphoned away toward the failed plan.

Third, if Lieberman continues like this, he will find that neither Democrats nor Republicans will be welcoming him. Dems obviously don't like his stance on his support for Bush. I'm sure Republicans won't like his fancy new idea about creating new taxes.