So, wait... let me get this straight. We need to reauthorize the Patriot Act, including giving courts the ability to seize an individual's personal records from libraries, hospitals and the like (Section 215). We need to make permanent the ability for U.S. agencies to listen in on your phone or computer conversations (Section 206).

The same Department of Justice that so earnestly labels the Patriot Act as vital and critical to our safety THEN has the intelligence to post an Al Qaeda training manual right on its OWN website?

Can ANYONE explain this to me... and quickly, before my head explodes. If it can't be explained, make sure the Senate doesn't take the same action that the House just did.

Jamboree of the Damned

Wish I could say I was having a great time at this year's Boy Scout Jamboree. Unfortunately, this happened. And now, while we were waiting to mourn that, this happened. What's worse, they say he's rescheduling and coming back tomorrow - Lord only knows what will happen to us next.

Screw sending me the bug spray - I'm on the next bus outta here!

Another Tip of the Hat...

So, I was pretty sure that my amazement at AOL and their incredible coverage of Live 8 was going to be a one-time deal.

Today, however, they've taken it to a new level... literally. AOL is covering the launch and mission of the Space Shuttle Discovery, and there are some pretty amazing features that make this unique from any shuttle coverage I've witnessed before.

Later in the day, they will have on-demand video coverage of the launch itself, including seven different camera angles that you can choose to view at any given time. In addition, there will be live 24/7 coverage of the mission as it happens, and a shuttle blog that will have entries by those on the shuttle. 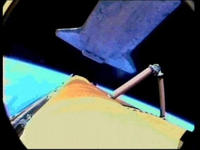 I sat in amazement this morning and watched the view from a camera that was mounted to the shuttle itself - you truly have to view it to appreciate it - behind the shuttle, you literally watch the ground get smaller and smaller, and turn into that traditional view of "Earth from Space" that we all know.

Amazing feat to put a shuttle into space, amazing technology to cover it in this way, and amazing that AOL provides it for free, regardless of whether you're an AOL member or not.... so check it out!

More of a Whimper Than a Bang... 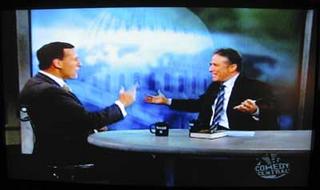 Well, the fireworks anticipated in the form of Rick Santorum's appearance on The Daily Show turned out to fizzle. The video of the interview will be up on the archives later today, and Towerload has a partial transcript, so you can judge for yourself, but it seems to me that Jon Stewart talks much more comfortably behind people's backs than he does in person. Even in interviews, for all of the insignificant people he skewers so craftfully, it seemed like a wasted opportunity for Jon to pass up a chance at Santorum's satanic verses. Even given the fact that Santorum had announced that he would not seek the Presidency in 2008, you'd think Jon would have tried to make a headline or to grab a quote.

Ultimately, he gave a despicable man an opportunity to line his pockets with some cash, giving free publicity to his book and his free-range discrimination.

Don't get me wrong... I still kiss my poster of Jon hanging over my bed every night before I go to sleep, and I lament the fact that I have to rely on Jon Stewart to even THINK about asking the tough questions that no one else dare ask. And given this bias, I wonder if there wasn't a reason for the softballs being pitched to Santorum.

Earlier in the evening, there was rumor that Santorum was not appearing, and that Maggie Gyllenhaal would be the evening's guest.

It was even up on their website briefly. However, at air time, Santorum was announced as the guest. I wonder, given the audience's booing and hissing during Thursday's show at the announcement of Santorum as a guest, if the audience didn't react similarly on Monday during the taping. Early in the interview, Santorum makes mention of booing, although there is nothing that can be heard.

I wonder if the crowd reacted "properly" when Santorum was introduced (that would be booing, hissing and generally throwing feces in the general direction of the stage area), and Santorum refused to go on with the interview. Perhaps they stopped tape (the interview did seem choppy or edited), instructed the audience to "behave" (the applause when Santorum appeared was some of the weakest I've ever heard on TDS), and then toned it down to make Santorum "comfy."

Again, this is just a theory - but I'd like to believe it rather than think that Stewart couldn't nail this HUGE target to the wall when he had the chance.

UPDATE: Just finished watching the Tuesday TDS, wherein Jon acknowledges the controversy of whether his interview with Santorum "sucked" or "suuuuuuuuucked", and then promises to take down tonight's guest, Diane Lane. Jon, you da man.

Well, hopefully THIS will give John Stewart something to gloat about - CNN just reported that Santorum will not be running for President in 2008.Now, if we can get him out of office in 2006, Pennsylvania (and the world as a whole) will be a much, MUCH better place!