Some Thoughts On Saddam Hussein 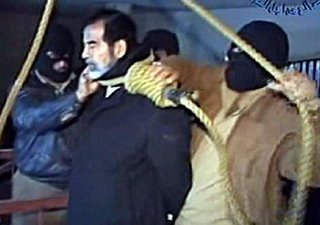 After consulting a friend of mine, I have been informed that the death of a notable world figure DOES, in fact, count when identifying a "celebrity death trifecta," regardless of the manner of death. Saddam's execution, therefore, completes the current death trifecta: James Brown, Gerald Ford, and Saddam Hussein. Wow. Poor James Brown.

I've never seen Fox News so happy. Well, not for a long time - they've finally got some "good news" to report. But is it really "good news?" Is our world any safer? Is Iraq better served? What will George Bush do without Saddam Hussein to kick around any more?

Yes... Saddam was a brutal dictator, and he was personally responsible for the deaths of hundreds of thousands of Iraqi citizens. But does that mean I agree with his execution? Nope. Sorry.

You see, I consider myself to be an actual Christian. Not a political Christian, nor a condescending, judgemental Christian. Here's what Christians SHOULD believe regarding execution:

"But if you do not forgive others, then your Father will not forgive your transgressions." Matthew 6:15

"You have heard that it was said, 'An eye for an eye, and a tooth for a tooth.' But I tell you, don't stand against an evil person. If someone hits you on the right cheek, then turn and let him hit the other cheek too." Matthew 5:38-39

What strikes me as equally interesting is that those who defend Gerald Ford for his compassion in showing mercy to Nixon are the very same individuals who are thrilled at the execution of Saddam Hussein today.

What's been CRAZY is listening to any of the news channels today as they switch back and forth among their different "lead stories"... as I have it on in the background, it becomes very confusing to follow who they're talking about. CNN, at one point, had a split screen, following the James Brown funeral in Augusta, the arrival of Gerald Ford's body and the motorcade, and people celebrating the death of Saddam in Dearborn, Michigan - all at the same time. They have pundits then commenting on each one, and if you're not listening closely, it's possible to come up with some hysterical foul-ups, including at one point where I thought that they were reporting that MC Hammer was going to be attending the funeral of Gerald Ford.

What a crazy way to end what has been a horrendous year.