The Joke That Wouldn't Die...

Yesterday, we posted about Hillary Clinton's quest for a theme song.

Gawsh... she sure is kewl. And sooo funny. The way she sort of just laughs off the way people make fun of her and all. Gawsh... I sure would like her to be MY President.

Should we ask her about her stance on Iraq? Naww.... we don't want to take her away from the important stuff.

I wonder how she'll vote on the Iraq spending bill? Well, I guess it doesn't matter, as long as she's having her own American Idol moment with the people.

That's what's really importnat, after all.

Traits that are missing from all sides of the playing field in Washington these days.

I had been searching for the right words to put together how I felt about the Democratic leadership and their "compromise" for the Iraq spending bill.


Anyone who believes that Nancy Pelosi and Harry Reid are capable of successfully ending this war and leading the Democratic party to victory in 2008 should consider having their heads examined.

The handling of this war is beginning to take on a lunacy that Kurt Vonnegut, Joseph Heller, George Orwell or Richard Hooker never could have imagined.

To an extent, this is what we've come to expect from the Bush Administration. It's their legacy, and it is what they will be branded with throughout history.

But the Democrats were charged with VERY specific mandates - for CHANGE.

And now look at them.

And for those of you who think that the Presidential election in 2008 is a slam-dunk for the Democrats, think again.

Who will have the courage... the bravery... the intelligence... and the eloquence to actually LEAD this country?

Ahead Of Our Time?

A few weeks ago, I was asked to appear on a Political Roundtable discussing the current state of Presidential Politics as we head toward 2008 - if you haven't caught the discussion on Radio Allegro, you should definitely check it out!

One of the lighter moments during our show was a discussion of possible theme songs for all of the candidates - I pointed out at that time that Hillary Clinton had been using Bachman Turner Overdrive's classic "You Ain't Seen Nothing Yet", which I found very ironic, as it contains the lyrics: 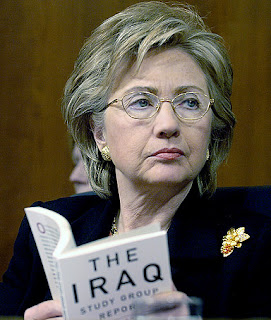 We thought it was funny and left it at that. Obviously, so did a lot of YouTube people, who were more than happy to help with their suggestions.

But this past Sunday, Chris Matthews decided to pick up the ball (and OUR bit) and run with it, as well:

MATTHEWS: Well, before we go to break, a lighter moment here. Hillary Clinton is choosing her campaign song right now, she says, and she's asking
for our suggestion.

Senator HILLARY CLINTON: (From Web video) It's something we've been struggling with, debating, agonizing over for months. So now I'm turning to you, the American people. Here's the issue: What do you think our campaign song should be?

MATTHEWS: Her Web site lists 10 tunes to choose from. But rather buy into her multiple choice, we've gathered some tunes of our own with a bit more bite. For instance, this gets right to the Hillary's la difference in this campaign.

MATTHEWS: Is that a piece of lint?

Or how about this one that hints at what she might do to her Republican rivals?

(Clip of Nancy Sinatra's "These Boots are Made for Walkin'")

MATTHEWS: I, of course, like this one that we're going to show right now, which plays up her biggest campaign asset.

(Clip of The Angels' "My Boyfriend's Back")

MATTHEWS: That song is so fraught with possible meanings. Katty Kay, do you have an idea for what will spruce up this campaign with the right lyrics and tune?

Ms. KAY: I would say that one that is not going to be is "Stand By Your Man." 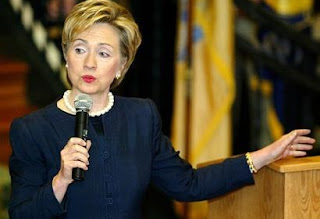 Ms. KAY: But perhaps how about "Girls Just Wanna Have Fun"?

Ms. MITCHELL: How about "I Am Woman, Hear Me Roar"?

Mr. BROOKS: I was starting with "Evita," then "Maneater."

Mr. BROOKS: But then I think she should go for just "Jesus Christ Superstar," just do the whole thing.

Bob, do you have a thought here?

Mr. WOODWARD: I think the person who suggested in the campaign that she do this is going to be fired by next week.

MATTHEWS: There was a grating aspect to this.

Well, I guess all is fair... we stole his "Tell Me Something I don't Know" bit for the end of our show, so we'll call it a journalistic exchange of sorts.

Nice to see Matthews looking to Radio Allegro for inspiration, though. 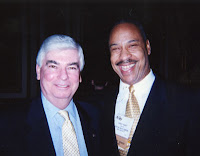 It seems I've been seeing a lot of this older gentleman with the white hair lately (he's pictured here... on the left) on some pretty big shows lately. Last Friday, he was on Real Time with Bill Maher.

And as if that wasn't enough to satisfy his fifteen minutes of fame, this past Sunday he was on Meet The Press (not to be confused with the other white haired gentleman whom he was debating, Newt Gingrich).

Who does this guy think he IS, anyway? From the looks of it, you'd think he was running for President or something! 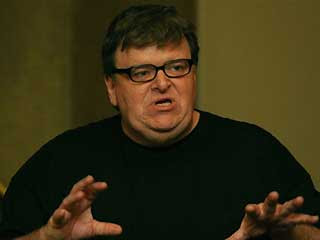 As if we aren't reminded on an almost-daily basis of the impending doom of the world around us, then there comes something that just slaps you in the face.

Fox News reviewed Michael Moore's latest film, Sicko. They called it "...brilliant and uplifting...." Albeit, the review is not exhaustive, and it tends to focus a bit more on the stir surrounding the filmmaker and his trip to Cuba than it does on the film itself.

I know, I know.... for too long now, you've been reading the commentary of your faithful FleshPresser, but secretly wondering "does he speak as remarkably as he writes?"

But regardless, now's your chance to check out the smooth sounds of your favorite FleshPresser!

Pressing The Flesh is honored and thrilled to join with the team at Radio Allegro - if you haven't checked them out yet, you MUST do so this instant!

I'll be providing political commentary, along with some pop cultural asides and.. hell, anything else they ask for - it's really a TOP-NOTCH production, and I'm thrilled to be invited to join Team Radio Allegro.

Check out all of their features, but I'd like to point you in particular to my first show, entitled SWIFTBOAT THIS - an analysis of Presidential Politics for '08. Hosted by my mentor over at Modern Fabulousity, and also featuring the wit and wisdom of Brilliant at Breakfast, this show will give you a primer for Presidential politics as the race of '08 heats up!

So, take a listen, and let me know what you think!

PTF is Back, and Even Better!

Some new features, some more regular posts, and a few added surprises along the way... welcome back to PRESSING THE FLESH!