As you celebrate the New Year this evening, I would hope that you take a brief moment to raise a glass and salute these individuals who left us during the year of 2005. The year saw scores of notable deaths, and you'll notice conspicuous absences of some of them (Pope John Paul II and William H. Rehnquist among them). This list is not meant to serve as a "Who's Who of Death" for 2005. Just some people that I'll personally miss. I am a better person because of the existence of these people: 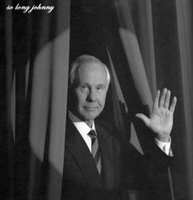 Johnny Carson - January 23, 2005 I remember falling asleep on the floor in front of the imitation woodgrain console television set at my grandparent's house while they watched and laughed at Johnny Carson. I feel fortunate that he stayed behind that desk long enough for me to understand and appreciate the gift that he brought to television.

Ossie Davis - February 4, 2005 I didn't truly become aware of Ossie Davis until I saw Spike Lee's film, Do The Right Thing, but he quickly became an actor to whom I was riveted. One that I sought out. He was a giant both on screen and in the theatre. I was also greatly influenced by the rarity and beauty of the relationship between Ossie Davis and Ruby Dee.

Arthur Miller - February 10, 2005 I'm writing this blog post at the age of 37. Arthur Miller wrote Death of a Salesman when he was 33. It is beyond comprehension that someone his age was able to create such a fully realized quintessential character like Willy Loman, and breathe life into him. I saw Dustin Hoffman perfrom the role when I was in high school, and actually had the opportunity to speak with him, and it's a memory I cherish to this day. 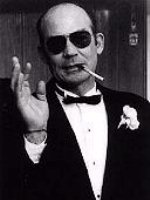 Hunter S. Thompson - February 20, 2005 - As a very young kid, I read Rolling Stone pretty religiously (I had this idea that I was going to have a HUGE career in radio... but that's another post), but I have to admit that I typically skipped Hunter S. Thompson. A few years later, I picked up a copy of The Curse of Lono at a yard sale (I was initially attracted to Ralph Steadman's amazing illustrations), and it fucked me up big time. A few years after that, I had the opportunity to hear Hunter S. Thompson speak in person. I'll never be the same.

Terry Schiavo - March 31, 2005 I grudgingly include her on this list only to hope and pray that she found the peace that this world would not let her have.

Peter Jennings - August 7, 2005 An icon of our pop cultural history. I grew up in the era of three network news anchors delivering the news each night, rather than the plethora we face today. Peter Jennings, at least for my generation, was the face of the news. 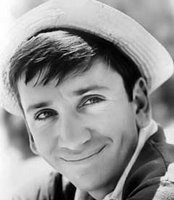 Bob Denver - September 2, 2005 As I was growing up, there was a time I can recall watching Gilligan's Island at least five times a day. I had seen every episode dozens of times, and yet I still laughed. And when I come across the show today, I can still recite all the lines. And I still laugh. You'll be missed, little buddy.

Don Adams - September 23, 2005 After graduating from Gilligan's Island, I moved up to Mel Brooks' slightly more intelligent humor of Get Smart, and Don Adams was brilliant with his comic timing, facial expressions, and delivery of such classic lines as "missed it by that much"... you KNEW the line was coming, but you still laughed. Hands up if you saw The Nude Bomb.... IN the theatre?!? (he asked, as he sheepishly rose his own hand) 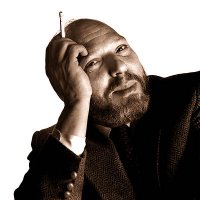 August Wilson - October 2, 2005 As a man of the theatre, there are very few who can equal the vision and clarity of August Wilson. Fences. The Piano Lesson. Joe Turner's Come and Gone. August Wilson captured not only characters and stories, but people and lives. I feel fortunate to have met him only months before his death.

Rosa Parks - October 24, 2005 A simple lesson from a graceful woman. Sometimes it takes so little to mean so much. And who knows what simple act we take to right that which is wrong around us will have the impact that she had?

Richard Pryor - December 10, 2005 I sat in my room and listened to "Live on the Sunset Strip" over and over again. Literally wore out the record. Before Pryor, I had listened to Bill Cosby, but when I heard the words come out of Richard Pryor's mouth, well, it was all over. Not to say that Cosby wasn't funny, but Pryor... man, he was DIFFERENT. 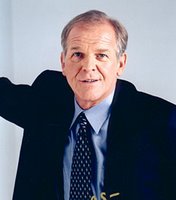 John Spencer - December 16, 2005 This one probably hurt worse than any other this year, and it's really hard to explain. I'm a huge fan of The West Wing, and watch it in syndication almost as much as I used to watch Gilligan's Island. John Spenser was so incredibly dynamic on screen, and such a quiet, simple person in his personal life. He reminded me of that favorite uncle that you always looked forward to seeing. I will miss his humanity more than anything, I suppose.

All of you will be missed... and remembered.

So, What Did I Miss?

Yes... PTF is finally back up and running. I managed to find the keys, and the engine is warmed up, revving and raring to go. I'll spare you the reasons and the stories behind the hiatus. Just let it be said that Pressing The Flesh is back on the air. No need to make any adjustments - we'll be taking over the controls now.

It seems a bit counterintuitive to make a new beginning as we face the end of the year. But in the best light, that's what it's all about, right? Letting that which is behind us go, and looking onward to that which is to come, right?

I'm looking at new templates, layouts, colors, et al for PTF, but it all seems a bit too confusing for a non-html guy like myself. Suffice to say that the one change you'll see here is the one I can control - the content. In the coming weeks, you'll see a variety of new regular features, the same healthy dose of personal opinion and insight that I've always been perhaps a bit too eager to share, and as we look to the New Year ahead of us, perhaps there'll be room for a little joy, as well.

Thanks for coming along on the adventure, kind readers. And now, onward....

Pressing the Flesh. To shake hands and mingle with many people, especially when campaigning for political office.

And even then, the dead skin cells of my flesh and yours co-mingle and I take away a very small, miniscule portion of you with me.

Even in the most unsatisfactory exchange, something is exchanged.

The act is solemn. Sacred. All that, yet taken for granted.

Lips press against a baby’s cheek. Too close. A moment of intimacy is reduced to a photo op. A marketing tool. Smile for the camera.

Now define the true meaning of the word pornography, you fuck.

Maybe the goal is to press as much flesh as possible. To spread yourself amongst so many others that it becomes impossible not to be "Of the people."

Flesh. It keeps us together. It helps us communicate. Flesh is an essential part of who we are, like carbon atoms and H2O. Flesh is what we are. What we touch. In the flesh. Flesh out. Flesh and blood. Flesh from my flesh, bone from my bones. A pound of flesh. You make my flesh creep. The spirit is willing but the flesh is weak. There are so many things you can do to it – pierce it, tan it, color it, oil it, wash it, scratch it, burn it, soothe it – but the best is to press it.