So you'd think political satire would be safe here... of all places. I guess not.

When we were growing up, it was just a superstition. Who thought we'd live to see it come true?

So, the whole melodramatic crisis was averted... or was it?

Priscilla, Queen of the Extremist Activist Radical Right Poster Child Blocked Judges was given her vote and approval for her lifetime appointment on Wednesday, and the rest of them are on their way.

I guess the true mark of a compromise is the notion that no one is happy, and it has been well documented how unhappy conservative Republicans are with the deal that was made.

But how savvy are Republicans, in terms of shifting the debate from the actual nominees being blocked by Democrats, to a debate on the existence of the filibuster? And while they fill the air with propaganda on how they had never, ever, ever, ever done anything like the procedural action the Democrats have taken with regard to these candidates, they threatened to kill the right to continue debate, and the right to preserve the voice of the minority within the Senate.

Listening to people like Arlen Specter on the floor earlier in the week on C-SPAN as debate began, I am not at all convinced that Frist had the votes he needed to pull the nuclear trigger. The Republicans, by and large, sickened me in this fiasco. Ads running stating that we send Senators to D.C to do one simple thing - vote. That, I'm sorry to say, is simply not true. I vote for an individual to REPRESENT me. and that means representing me by voice, political action, and any discussions between Senators within the chambers of the Senate.

So, I was nauseous at the notion that Republicans were more interested in a power grab than legislating for America. I was thrilled to hear about Democrats and Republicans working together to come up with a solution. And I'm fully aware that there was going to be no way for Democrats OR Republicans to get everything they wanted out of the deal - that's part of what compromise involves.

But by shrewdly shifting the debate to the filibuster, Republicans got more of what they wanted. Their judicial nominees are getting their party-line votes. Democrats assert that they "saved the filibuster" - but DID they? Frist and other Republicans have all stated several times that just because the crisis has been averted for now, the nuclear option remains an option. Other Republicans involved in the deal like Sen. DeWine and Sen. Graham have echoed the threat.

So, Democratic Senators give up the fight on nominees, still have the nuclear gun to their head, and simply kick the can of responsibility further down the road?

I'm ALL for deal-making and compromise, and think this was orchestrated to come to the point it did, for the theatricality of the event, and so that Senators could score some political points. The problem hasn't been solved with this compromise, however. These nominees will sail through the Senate, more nominees will be brought forward, and the cycle will begin once again.

Nice work, Senators. Now go back to your troughs, pigs. 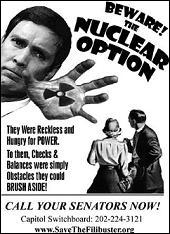 It's Happening As We Speak....

My apologies to you, gentle reader (if any of you are still out there)...

After building a pretty good head of steam, and regular postings and readership, I got cocky and thought I could mess with the html to make the format of PTF even more interesting. Let it be said that while I consider myself to be adequate at critical thinking and writing, my html skills have a lot to be desired.

Thank you for those of you who e-mailed asking if PTF was still operating. It is, and it will. Last night, I was REALLY looking forward to watching The Daily Show, and tuned in to find that it was yet another repeat. And don't even get me started on what's going on with Chappelle's Show. I know about the disappointment that happens when one goes seeking new content, and it's not there. Not to compare myself to Jon Stewart by ANY means. And I haven't sought refuge in South Africa until my "funny" comes back.

And for those of you who e-mailed requesting nude photos of Eva Longoria... well, this isn't actually the type of "Pressing the Flesh" that this blogger had in mind, but if it'll mean a temporary bump in readership, I'll consider it. Hell, even the BEST bloggers have been known to post an occassional fleshy blog. ;)

Have you been FABULOUS lately?

If you haven't, then you must!!

By this, I mean that if you haven't been reading Modern Fabulosity, you're missing out. Missing out on some of the smartest analysis to be found, wrapped up with a witty, sometimes catty candor that makes it all go down easy.

Although I'd like to see John Edwards run for President once more under a different set of circumstances, ModFab nails it on the head with reference to some of the other would-be candidates for '08.

In fact, if you want a real clear, representative summary of the fabulousness of ModFab, check out today's posting -short, sweet, to the point, incorporating much of what ModFab focuses itself on, and... well... fabulous! Check it out!

No Longer the Apologist

As many readers of PTF know, I have made attempts to defend the actions of the Catholic Church here in the past, probably more due to a necessity to preserve the faith I was raised with, especially in a time when it feels as though there is such a strong need for faith.

But time and time again, I pound my head against the wall, wondering how much more the Catholic Church can do to kill itself, rather than having others kill it.

Most recently, William Donohue, President of the Catholic League, is the murderous man responsible for chipping away at the faith of millions. This past week, Senate Majority Leader Bill Frist and leaders of so-called "faith-based organizations" held their "Justice Sunday."

As Max Blumenthal, writing for The Nation, points out, William Donohue had no problem sharing the stage with individuals like Southern Baptist Theological Seminary president Dr. Albert Mohler, who has railed against the Catholic Church, stating that "As an evangelical, I believe that the Roman Catholic Church is a false church.... It teaches a false gospel. And the Pope himself holds a false and unbiblical office."

No... William Donohue was more than willing to share the stage with these individuals. Beyond joining hand in hand with these extremists, Donohue was emboldened by the notion of speaking to a "receptive audience", stating:

"...if the secular left is worried they should be worried.... I mean, this is - these people, they claim to be the high priest of tolerance, and yet they practiced intolerance against us, they want to set us up as if we're the radicals....

Let me tell ya, and it's not just Catholics and Protestants, some orthodox Jews the other day have set up an organization last Thursday, Don Feder and others, to fight against anti-Christian sentiment in this country. And I asked them, why as Jews are you concerned about this issue? They said well you know what, to the extent that Christianity is disparaged, that voice, that pro-life voice and this opposition to the most insane idea I've heard in my whole life, of two men getting married, I mean - that's something that you expect in the asylum, quite frankly....

...those people on the secular left they say well we think you're a threat. You know what? You're right."

William Donohue, I believe you. I have seen the devil, and his name is Donohue. But c'mon... the Catholic League is formally titled "The Catholic League for Religious AND CIVIL RIGHTS" - so maybe he just misspoke - got caught up in the tidal wave of hatred in the room that day. No, trust me. He's the devil.

Not convinced? Here's a little nugget I found spoken from the words of the man who says, "...they practiced intolerance against us..." - take a look at what Donohue has to say when he weighs in on the issue of the tragedy of AIDS. Just in case you don't want to click on the link, let me highlight one portion of what he said - this man who is so concerned about intolerance and discrimination:

"Look, look, there's a new strain of HIV available in New York City. It's because of gay men.... The gay community has yet to apologize to straight people for all the damage that they have done -- for contaminating the blood supply in New York City and around the country. And I find it amazing that, when people are acting so morally delinquent, that they're asking for more rights at the same time."

While FleshPresser still believes that tolerance should mean tolerance for EVERYONE - liberal, conservative, or otherwise - you will no longer find PTF defending the Catholic Church. They're digging their own grave, and they deserve whatever comes their way.