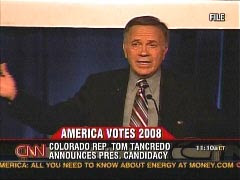 It looks like Tom Tancredo, who was the first official candidate to put his name on the ballot in New Hampshire, is dropping out of the race. What makes this doubly sweet is that the right-wing extremist Representative from Colorado said he wouldn't not run for a sixth term in the House of representatives.

Not only do we not have to stare down at the far end of the GOP debates and wonder who that guy at the last podium is, but we won't have to listen to this moron talking about blowing up Mecca in retaliation for future terrorist attacks, or outlawing all immigration - legal or otherwise. Hell... you know it's bad when even the National Review says "Tom Tancredo is an idiot."

Hopefully, we've heard the last of Tancredo for some time to come. Although he's whispered about the possibilities of a Senate run, I'm sure the good people of Colorado wouldn't do that to the United States.... would they?

Wait... Am I Still Dreaming?

Maybe I'm still asleep? Maybe all of this has been a bad Dallas-esque dream? Maybe it still is?

First, I see that Joe Lieberman has endorsed John McCain for President in 2008? So, is Lieberman a Democrat, or an Independent, or a Reformed Democrat, or a Demopublican?

Well, I guess that's like it was before I fell asleep.

But then, I read that Hillary Clinton will be reaching out George Bush Senior (ya know... Bill's new drinking buddy) to help restore the image of America that's been so badly tarnished by George Bush, Jr.?

Before I fell asleep, I remember hearing that Americans wanted change in 2008, and yet if this keeps up, we'll have the following timeline:

Did I Miss Anything?

I was told that I fell asleep at the wheel, and just woke up...

Do we have a new President yet? Are they done debating? What day is today?

I woke up to find this picture plastered on the wall in front of my desk. Not sure what it means, but it COULD be sign. I'll share it with you and see if you can tell me.... 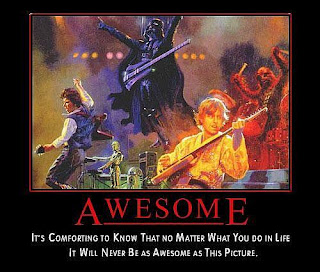 Sorry about the extended snooze. I'll get back to all the PTFin fun now!