... from one of those alleged "phony soldiers":

The results of a new Washington Post-ABC News poll were released today, and it tells us a lot that we already knew, and a lot that it seems the American public knows, but the Congressional majority has yet to figure out.

Onward, to the news that Americans have been trying to tell Congress. Twenty-nine percent of Americans approve of the way Congress has been handling it's duties. That's a full four percentage points below Bush's approval rating. Although Congressional Democrats tend to fare a bit better (38%) than Republicans (29%), this is damning, all the same. Although 55% of Americans see the blame for Congressional inaction falling to the laps of President Bush and Congressional Republicans, Democrats have not been as strong as most Americans would like them to be. 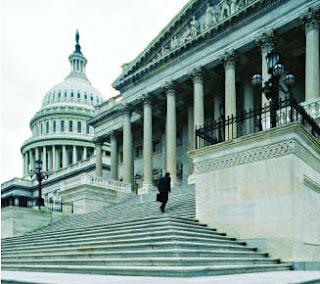 Congressional Democrats were swept into power largely on the idea that America needed a new direction, and new leadership. Failing that leadership in the White House, they looked to provide it in Congress.

59% of Americans do not believe that the Iraq war was worth fighting - a majority.

54% of Americans believe that troops should be brought home from Iraq - a majority.

63% of Americans believe that Congress should not fully fund the $190 billion in additional funds that Bush has once again requested - a majority.

In addition to this, there's a proposal to increase federal spending on children's health insurance by 35 billion dollars over the next five years. 72% of Americans support this increase - a majority.

Add to all of this the fact that Democrats are in the majority of both houses of Congress. In addition, Americans favor Democrats over Republicans on just about every major issue in the United States today - 49%/34% on Iraq; 56%/26% on health care; 51%/33% on the economy; 52%/29% on the deficit... in fact, the only place where the Republicans fall within the margin of error is over terrorism - 41%/40%.

Given ALL of this information, one MUST ask the question of why it is so incredibly hard for Democrats to manage any meaningful movement in Congress? They have the support of a majority of Americans. They have a seeming mandate for change. They have poll after poll stating the will of the American people.

What is it they don't have? One could argue that it's the will to change, or a spine. 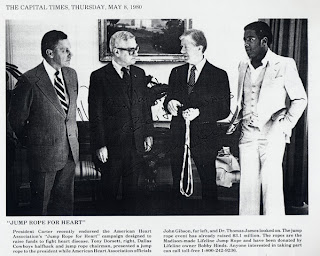 When you were a kid (or a President), did you ever jump rope?

OK.... I may be sharing too much of my past with you, but on those times when I jumped rope, and missed a jump and had to step out, the big decision was always hard - when to jump back in? You have to time the swinging rope just right, so as not to be clobbered once again by the rope crashing down on your head, or tripping and falling again.... that sort of thing.

Certainly there has been more than enough to talk about in the time that I've been gone, but it's been trying to find just the right moment to jump back in.

Damned that real life, which always plays a part in the decision, as well. In addition to finally completing my graduate thesis, I've been in the midst of directing a really complex production of Charles Mee's BIG LOVE, and with the beginning of the new academic calendar, as well.... well, my timing's been all off.

But, when push comes to shove, you've got to just jump. And so here I go... jumping once more into the fray.