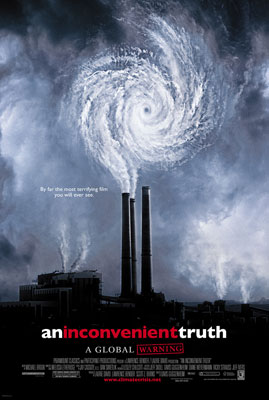 This past weekend, the top of the box office belonged to X-Men: The Last Stand. It made over $122 million dollars during the four-day Memorial Day weekend, averaging a little over $33,000 per screen. Very impressive numbers, to be sure.

So what film averaged nearly $92,000 per screen? Al Gore's An Inconvenient Truth.

I'm not posting this to make any conclusions. I'm not hear to blow the trumpet for Al Gore, or to posit that somehow Al Gore's film beat up on the X-Men in any way, shape or form.

This is all I'm saying - An Inconvenient Truth ran on four screens this Memorial Day weekend. Two in New York and two in Los Angeles. It's total box office thus far is almost a half-million dollars.

I don't know about the West Coast, but here on the East Coast, this was probably one of the nicest Memorial Day weekends we've experienced in a long time, in terms of weather.

Despite that, this film ran to what had to be sold-out houses throughout the weekend in order for it to pull numbers like this. Certainly, one could argue that the audience was concentrated, because of the small number of screens, and that it wouldn't have had such a high average if the film ran on more screens.

Still, it will be interesting to me to see how the film does as it opens wider. I know for a fact that I wouldn't want to go listen to Al Gore talk about global warming on a Memorial Day weekend... and I AGREE with Al Gore. But at a minimum, hundreds of thousands of people this past weekend did just that.

I will offer this simple thought tangentially related - I'm curious why the issue of the environment and energy has to be seen through a partisan lens? I don't know if Al Gore is running for President again in 2008, and I'm probably in the minority of Democrats when I say that I hope he doesn't.

But can't we all agree that environmental issues are important ones? The stewardship of this world that we live in is a worthy cause, regardless of political affiliation? That it's simply a matter of time before we evolve past the notion of a fossil-fuel driven economy, and the sooner we tackle the problem, the less enormous it will be to solve? Forget the geopolitical ramifications of whether we get our oil from the Middle East, or if somehow we were magically to receive it all from Alaska. Wouldn't it be a hell of a lot easier if we simply didn't NEED to get it? Regardless of its location, it will run out eventually, and so why would we be so selfish as to think "well, it's not going to happen in my lifetime, so why should I worry about it...." It affects each and every one of us... regardless of which side of the aisle we sit.

There are so many debates which polarize us. I just don't understand why this should be one of them.

We'll continue to follow the progress of An Inconvenient Truth as it opens wider in the next few weeks.