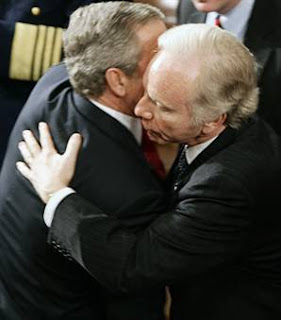 So, I wasn't up early enough to catch Chris Matthews and Meet The Press this morning... the French Open pushed my normal Sunday routine out of whack, and I was forced to watch CBS Face The Nation.

And what to by wondering eyes just appeared, but Joe Lieberman, the "Democrat" - and what did he say? Here it is, as follows:

LIEBERMAN: "...I think we've got to be prepared to take aggressive military actions against the Iranians to stop them.... to me, that would include a strike over the border into Iran...."

BOB SCHIEFFER: "Well, let's just stop there, because I think you probably made some news here, Senator Lieberman. You're saying that if the Iranians don't let up, that the United States should take military action?"

LIEBERMAN: "I am.... if they don't play by the rules, we've got to use our force, and to me, that would include taking military action to stop them from doing what they're doing."

Leave it to Dubya's very favorite Democrat to beat the drums of war even louder, at a time when virtually all Americans state that Iraq was a mistake.