If you want even MORE fun with Google, take a look at this. 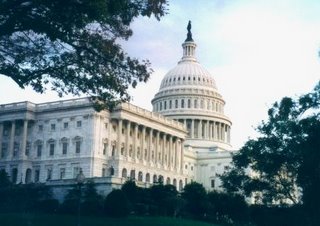 House and Senate Democrats have pledged a welcome flurry of progress in their first days leading Congress. Included as priorities:

1. Ethics reform, to clean up Congress so the government can get back to serving the American people.

2. Raising the minimum wage, to give millions of American families an opportunity to achieve the American Dream.

4. Acting on the 9/11 Commission Recommendations, to fully secure our ports and borders and ensure that our first responders have the resources they need to keep America safe.

5. Funding stem cell research, to open the promise of life-saving cures and treatments.

6. Energy reform, to address global warming and put America on a path to energy independence.

7. Easing the financial burden of college tuition, to increase accessibility for hardworking students and their families.

8. Strengthening and rebuilding America's military, to ensure the American people get the real security they deserve.

10. Pay-as-you-go legislation, so that Congress has to cover its costs just like American families do.

Action has already taken place on a minimum wage increase, 9/11 Commission Recommendations, and funding for stem cell research. Votes on a mandate for the Federal Government to negotiate with pharmaceutical companies as a part of the Medicare Prescription Drug Plan is expected on Friday. A cut on interest rates of student loans is anticipated by next Wednesday.

Critics have argued that these are the "easy" issues - widely supported by the public and not facing strong opposition.

I would simply ask this - if these issues are so easy, then why weren't they passed when Republicans were leading Congress?

I am pleased to FINALLY see progress taking place in the halls of Congress.

How Do You Spell Failure? 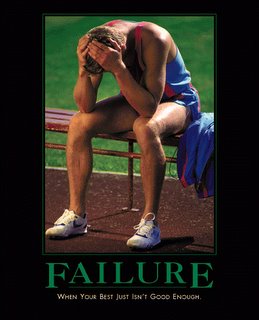 Type "failure" into Google and see what pops up.

Why Not Give Bush The Benefit Of The Doubt?

Tonight, Keith Olbermann, as he so frequently does, succintly put together the case as to why the President LONG AGO lost ANY credibility he might have in presenting ANY case for future plans in Iraq. Here is the transcript from Olbermann:

Any meaningful assessment of the president's next step in Iraq must consider his steps and missteps so far.

So, let's look at the record:

Before Mr. Bush was elected, he said he was no nation-builder; nation-building was wrong for America.

Now, he says it is vital for America.

He has told us the war is necessary…Because Saddam was a threat; Because of 9/11; Osama bin Laden; al Qaeda; Because of terrorism in general; To liberate Iraq; To spread freedom; To spread democracy; To keep the oil out of the hands of terrorist-controlled states; Because this was a guy who tried to kill his dad.

In pushing for and prosecuting this war, he passed on chances to get Abu Musab al-Zarqawi, Muqtada al-Sadr, Osama bin Laden.

He sent in fewer troops than recommended. He disbanded the Iraqi Army, and "de-Baathified" the government. He short-changed Iraqi training.

He did not plan for widespread looting, nor the explosion of sectarian violence. 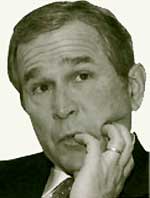 He sent in troops without life-saving equipment.

Gave jobs to foreign contractors, not the Iraqis.

Staffed U.S. positions there based on partisanship, not professionalism.

We learned that "America had prevailed", "Mission Accomplished", the resistance was in its "last throes". 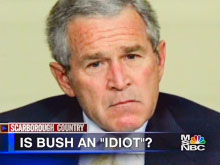 We would be greeted as liberators, with flowers.

The enemy was al Qaeda, was foreigners, terrorists, Baathists.

And after all of that, today it is his credibility versus that of generals, diplomats, allies, Republicans, Democrats, the Iraq Study Group, past presidents, voters last November, and the majority of the American people.

So, tell me again why I'm supposed to give this President the benefit of the doubt on this new plan that essentially rejects the findings of the bipartisan Iraq Study Group and military experts?

An Alternative To The Presidential Address This Evening

If you want to know more about the Presiden't new plan, but you simply don't want to watch the Address this evening, feel free to enjoy this Blackadder video, and pay particular attention to the point about two minutes into the clip - you'll get essentially the same message:

The Hard Run And The Hardware 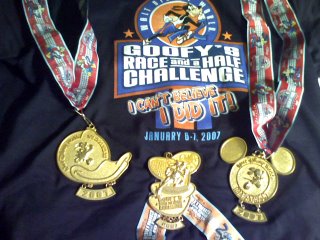 There are those who don't understand running.... they have no concept of why someone would voluntarily run someplace where there was ANY form of alternative transportation available. I'm not sure that I can fully explain it - there's a discipline to it that I enjoy, a huge ability to relieve stress and find a mental balance as your body moves onward, and a challenge in pushing myself farther and farther - it's an adrenaline rush for me, to be sure.

Today I successfully completed my Goofy Challenge at the Walt Disney World Marathon Weekend, by running the marathon. That, combined with the half-marathon from yesterday, equalled a total of 39.3 miles.

Once again, today was a scorcher. There was good news and bad news. The good news is that, for an hour or so after the sun rose, there was a thick fog, which kept the sun from beating down on us. The bad news was that the fog burnt off. The sun and the heat was relentless today - I watched people dropping around me from dehydration or heat exhaustion.

I tempered my run accordingly. You can almost exactly see where the fog lifted, and the sun began its assault:

It's pretty staggering to think that I ran long enough to sit through about three or four movies. But when you ask why I do it, I'll tell you this - I had a shirt made up to race in.... amongst other things, it said "If you believe, clap your hands!" Getting to mile 24 and beyond, with MONSTER blisters on the soles of my feet, and no shade to be found, with legs beginnignt o cramp up - in the midst of ALL of that discomfort, it is literally staggering to continue to run and hear crowds of people on the sides of the course cheering your name, clapping, and yelling "I believe!" It sounds cheesy, but it's pretty damned intoxicating.

I finished my goal, which was to complete the marathon today, and to complete the Goofy Challenge. I am amazingly proud of what I've accomplished. And a little stumped as to what I should challenge myself with next... any thoughts? 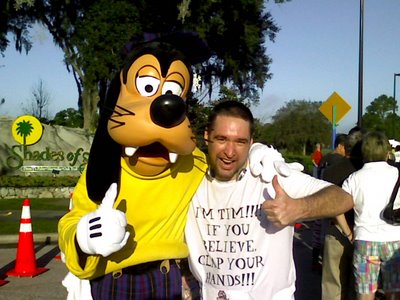 One Down, and One To Go! 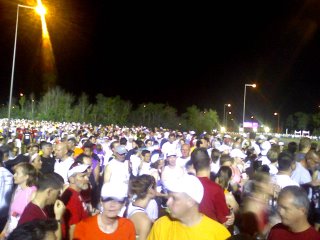 So, the key word for today was HEAT!!! The last time I ran down here (two years ago), it was in the mid-30s when we approached the starting line 4:00AM, and by the time the race was complete, it had moderated to the mid 50s.... awful waiting around weather, but GREAT running weather.

Well, today, at 3:30AM, it was 68 degrees, and nearly 90% humidity. It was GREAT waiting around for the race to begin weather - VERY comfy - but NASTY racing weather. It was in the mid 80s by the completion of the race.

Everybody's times suffered a bit as a result, and by hopes of running the half in under two hours were pretty much shot by mile 8. The only nice thing is that a breeze began to pick up and it remained overcast for most of the race. 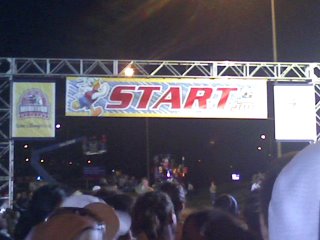 Here then, are my official results.... I finished in 2:40:52, respectable for my own records, but not my best. I finished 6438 overall - a VERY respectable mid-pack finish. I finished 3197 in my gender category, and 592 within my age division. These are out of the 15,000 who raced today, so I feel very good about myself, all things considered.

So, now I head to bed, so that I may get up again tomorrow at 2:30AM and do it all over again. Tomorrow promises to be twice as challenging, however. Not only is it twice the distance, but it's supposed to be hotter, and clear skies mean lots of sunshine and little shade.

I'm not the world's best photoblogger, but I took these pictures of the race from my cell phone.... hope you enjoy them! 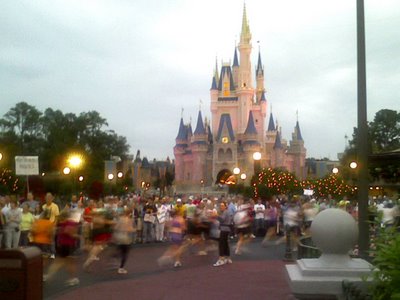 Off To The Races!

Well, today I'm sitting in a hotel room in Walt Disney World, getting ready to do something completely crazy. I'm running in the Goofy Challenge and a Half - part of the Disney Marathon weekend.

What does that mean? it means that tomorrow, I'll be running the half marathon - 13.1 miles.On Sunday, I'll then be running a full marathon - another 26.2 miles, for a grand total of 39.3 miles.

I'll try to provide details as they come, but I wanted to post to say thanks to all of those who have wished me well - I'll post results as soon as I recover!!!